You are here: Home › Ca. Gov. Schwarzenegger Announces $26.5 Million in Awards to Counties to Combat IHSS Fraud
By California Newswire on December 21, 2009 in California News

SACRAMENTO /California Newswire/ — Committed to combating fraud within the In-Home Supportive Services (IHSS) program, Governor Arnold Schwarzenegger today joined Sacramento County District Attorney Jan Scully and other state officials to announce $26.5 million in awards for up to 45 California counties to assist with investigating fraud, and to better coordinate and share data between the counties and the state. 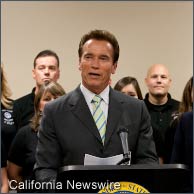 â€œI promised to fight fraud and abuse in Californiaâ€™s In-Home Supportive Services, which assists some of Californiaâ€™s most vulnerable citizens. Today, I am proud to announce $26.5 million in awards that will help root out fraud in this program,â€ said Governor Schwarzenegger. â€œAny fraud in our system is too much and, now more than ever, every dollar must count. We estimate a significant return on our investment in this budget year alone and that is very good news not only for taxpayers but especially for the Californians that rely on the resources provided by this important program.â€

It is estimated that hundreds of millions of dollars are inappropriately or fraudulently expended through the IHSS program each year. With nearly half a million Californians relying on the stateâ€™s IHSS program, the Governor fought to include anti-fraud proposals in the 2009-10 budget to ensure the stateâ€™s limited resources are provided as intended. The budget included a number of reforms to significantly strengthen efforts to reduce and prevent fraud in this fast-growing program, including the $26.5 million to help fight fraud across county and state agencies. Other reforms include:
â€¢Background checks and fingerprinting for all IHSS providers
â€¢Fingerprinting for IHSS recipients
â€¢Targeted mailings to high-risk or suspect providers
â€¢Enhanced anti-fraud training for county social workers
â€¢Time sheet improvement: requiring that timesheets be signed by both recipient and provider and enhancing timesheet reviews
â€¢Prohibiting the use of P.O. Boxes to receive provider checks
â€¢Unannounced home visits
â€¢Increasing the number of state fraud investigators
â€¢Requiring providers to supply copies of identity documents and appear in person
â€¢Specifying particular crimes for which a provider can be excluded from the program

Sacramento District Attorney Jan Scully said, â€œI pushed for a multi-agency IHSS Fraud Task Force because, as District Attorney, I saw many cases of abuse of both the IHSS system and the recipients of care and felt that only with a multi-agency approach would we be able to stop the abuse on all levels. The goal of the IHSS Fraud Task Force is to protect the integrity of the IHSS program and to make sure the providers are doing what they are paid to do. The task force is still in its infancy with case work beginning on September 1, 2009, but it has been well received by our local IHSS Advisory Committee as they realize that honest recipients and providers have nothing to fear. In these fiscally challenging times, this award to Sacramento County will allow us to continue and expand our IHSS fraud efforts and work to keep taxpayer dollars from going to those who try to cheat the system.â€

â€œThis funding will go a long way in assisting counties and the state to make sure that our scarce public dollars are available to people with legitimate needs,â€ said Department of Social Services (DSS) Director John Wagner. â€œWhen people commit fraud, our ability to serve Californiaâ€™s neediest people is compromised.â€

DSS provided instructions to counties in September 2009 on how to apply for the funding awards. Each county was required to develop a plan in cooperation with their county district attorney and welfare department. Each countyâ€™s plan also had to be approved by its board of supervisors prior to submission to DSS. In all, DSS received 45 county plans: 29 plans were complete and are being funded today, and the department is working with the remaining 16 counties to help them complete their plans so that funds can be released to them in January 2010.

The 29 counties that received immediate funding today are:

The 16 counties that will receive funding once their plans are completed are: