You are here: Home › Golden Gate Park 150th Anniversary: 150-Foot Observation Wheel to Offer ‘Bay to Breakers’ Views for Riders in 2020
By California Newswire on December 30, 2019 in California News, Featured

SAN FRANCISCO, Calif. /California Newswire/ — San Francisco Mayor London N. Breed has announced an illuminated 150-foot observation wheel is among the attractions being planned for Golden Gate Park’s 150th anniversary in 2020. The wheel will provide riders with sweeping views from the ocean to downtown San Francisco. 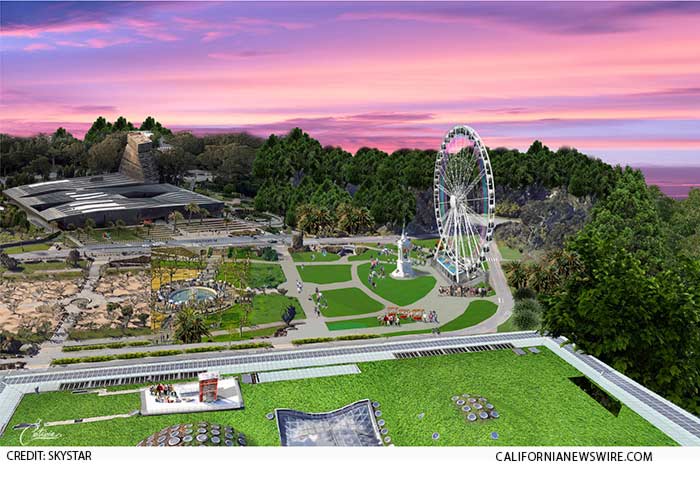 The observation wheel will launch on April 4th, 2020 and operate through March 1st, 2021. It is planned for Golden Gate Park’s Music Concourse, the outdoor plaza near the de Young Museum, the California Academy of Sciences, and the Japanese Tea Garden. The wheel features 36 fully enclosed, climate-controlled gondolas that each seat six passengers. It was previously installed in Louisville, Kentucky’s Waterfront Park; Cincinnati, Ohio; and Norfolk, Virginia.

“Golden Gate Park is a San Francisco treasure and a place where everybody can enjoy the best that the City has to offer,” said Mayor Breed.

“We want to celebrate the Park and give people a new way to appreciate the beauty of our City during this 150th anniversary celebration. This observation wheel is just the first of many exciting announcements we will be sharing in the comings months as we get ready for the coming year-long celebration.”

The San Francisco Recreation and Park Commission is expected to approve an agreement between the Recreation and Park Department and the attraction’s operator, SkyStar Wheel, LLC. This will be the first time an observation wheel of this scale has operated in San Francisco since Golden Gate Park hosted the Midwinter International Exposition of 1894, where the Firth Wheel was a major attraction, standing at 120 feet and carrying ten people per carriage.

“This 150th celebration provides an amazing opportunity to tell the story of Golden Gate Park—its past, present and future—and share all our park has to offer,” said Phil Ginsburg, General Manager of the San Francisco Recreation and Park Department. “The storied Music Concourse with its spectacular observation wheel will be the center of a yearlong party that connects yesteryear with tomorrow.

The celebration of “Everybody’s Park” is being organized by the Recreation and Park Department and the San Francisco Parks Alliance. The anniversary events will bring together more than 150 cultural institutions and community groups to pay tribute to Golden Gate Park.

“This celebration will bring San Francisco communities together to be a part of an amazing tribute to Golden Gate Park and celebrate the many attractions within its 1,017 acres that are available to everybody young and old,” said Drew Becher, CEO of San Francisco Parks Alliance.

The yearlong celebration will include major events and attractions, including a free park-wide community celebration on April 4th—exactly 150 years after the California Legislature created Golden Gate Park. The celebration will bring together thousands of San Franciscans and visitors to experience Everybody’s Park and all that it has to offer for people of all ages and interests.

“We are eagerly anticipating Golden Gate Park’s celebration, coinciding with our own 125th anniversary,” said Thomas Campbell, Director and CEO of the Fine Art Museums of San Francisco. “The park has been an incredible home to the de Young museum for the past 125 years and we eagerly await the opportunity to see it from new heights when the observation wheel opens in 2020. Most importantly, we are proud to continue to offer free admission to all Bay Area residents every Saturday giving visitors to Golden Gate Park the opportunity to enjoy art from around the globe, here in their own backyard.”

The wheel is roughly as tall as the de Young Museum’s observation deck. The 12-minute ride will be $18, or $12 for seniors and children under 13. Rides will be free during the April 4th park-wide celebration.

“At the Academy, we’re committed to connecting people to nature and inspiring a deeper appreciation for our natural world,” said Dr. Scott Sampson, Executive Director of the California Academy of Sciences. “We’re thrilled to celebrate this exciting moment in the history of Golden Gate Park and we hope that San Francisco residents and visitors alike will come explore all that this incredible park has to offer in 2020 and beyond.”

A Golden Gate Park 150 website has been created at http://www.goldengatepark150.com that provides a guide to the special events, programming, exhibitions, history, amazing stories and the many things to do in the park. Information about the observation wheel in the Music Concourse, along with other events, will be announced in January as part of an official launch event.

In 1870, an act of the State Legislature created the boundaries of Golden Gate Park in western San Francisco. Skeptics said that that park could never be built, but a determined engineer teamed up with a skilled horticulturalist to make the sand dunes bloom, displaying the creativity and can-do spirit that has always been a part of San Francisco. Since that time, it has stood with a growing city as a haven from urban life and a place where San Franciscans have always come together. Today, Golden Gate Park’s 1,017 acres boast 24 million visits each year by those who come from across the city, the nation, and the world to visit its historic institutions, attend concerts, participate in races, and enjoy activities from soccer and lawn bowling to hiking and fly-casting.