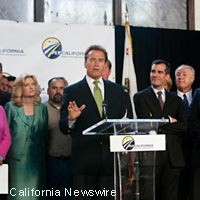 â€œRecovery Act funding for high-speed rail will go further and create more jobs in California than in any other state in the nation â€“ because we have pledged to match it dollar-for-dollar,â€ said Governor Schwarzenegger. â€œLabor, business, environmental and government leaders across the state are united in support of this historic proposal because it would lay the foundation for California’s 21st century transportation system, create nearly 130,000 jobs and improve our mobility, quality of life and environment.â€

California is proposing the only true high-speed train capable of 200-plus miles per hour and is further along in planning than any other similar project in the nation. Planning and engineering work for Californiaâ€™s 800-mile system has been ongoing for more than 13 years.

California voters approved Proposition 1A, the $9.95 million high-speed rail bond, in November 2008. In August 2008, Governor Schwarzenegger signed AB 3034 replacing Proposition 1 with Proposition 1A on the November 2008 ballot. The measure improved the High-Speed Train Bond Act by providing increased taxpayer protections and fiscal controls. The Governorâ€™s signing of this measure also assured public-private partnership financing for high-speed rail and limited the amount of bond funding that can be spent on non-construction items.

â€¢$276.5 million for preliminary engineering and environmental work in all system segments including Los Angeles to San Diego via the Inland Empire, Los Angeles to Palmdale and Bakersfield, Sacramento to Merced and the Altamont Rail Corridor. Total jobs created: 12,000.