You are here: Home › New book celebrates the magic of adoption and diversity through creative storytelling
By Send2Press Newswire on November 2, 2022 in Mass Media News 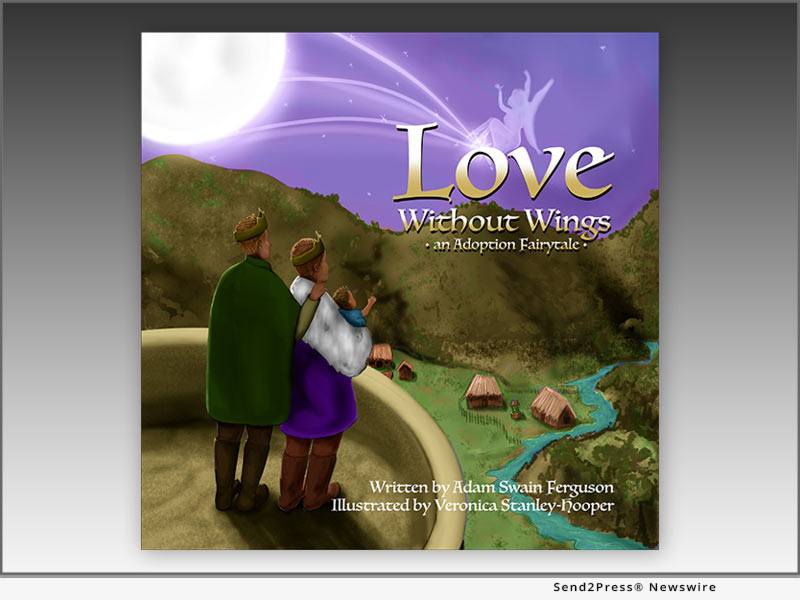 SANTA CLARITA, Calif., Nov 02, 2022 (SEND2PRESS NEWSWIRE) -- Adam Swain Ferguson, founder, Purple Fox Entertainment, is a creative producer and author. His new book release, "Love Without Wings: An Adoption Fairytale" (ISBN: 979-8986768014), was inspired by a true story - his own story - and celebrates diverse families made complete through adoption. It's scheduled to be released during National Adoption Month (November) on November 19, National Adoption Day and is available for pre-order on the Purple Fox Entertainment website here: https://purplefoxentertainment.com/product/love-without-wings/

While "Love Without Wings" is written for children, it's also the perfect read for adoption agency staff, counselors and teachers in search of a positive educational tool.

After two years of waiting and wishing, the author and his husband had nearly given up hope on adopting. But then it happened. They received a call that would change their lives forever. The woman who would be their son's biological mother had chosen them to adopt her baby boy.

From the day their son, Taran, was born Ferguson had made up a fairytale-style bedtime story that told a magical tale of how their family came to be. He soon realized that this story had the potential to move beyond the nursery walls. So, he set to work.

The book's storyline centers around two kings who embark on a magical quest to become fathers; they have a shooting star as their guide. At the end of a sparkling trail, their greatest wish is finally fulfilled after a miraculous encounter with a fairy. Coincidentally, she'd been wishing on that same star, but her wish was to find the perfect family for the very special baby growing in her belly.

"As an adoptive dad, I wrote 'Love Without Wings' with hope that it will encourage children to feel pride in the magic that they bring to their families' lives," Ferguson says.

Since becoming a father, Ferguson says he's had difficulty finding books that approach adoption from the creative storytelling side of things. He found most to focus on the mechanics and process. And, he's not alone. To date, many have had the opportunity to preview the book and agree that it takes a refreshing look at adoption.

Amanda K., a director at LifeLong Adoption says, "As an adoptive parent coordinator who works alongside waiting adoptive parents, I appreciate that this book provides hope and light during a journey that can be difficult. The way this story is full of meaning and love is perfectly done."

Geraldine O., Ph.D., a child psychologist shares that the book is "a beautiful and thoughtfully written fairy tale about adoption from the unique perspective of love from the child's biological and adoptive parents."

She says that this is not often depicted in children's picture books and believes that this book will make a wonderful addition to a child's library as well as serving as a much-needed therapeutic tool for child psychologists.

Adoptees are singing its praises too. After reading "Love Without Wings," Mike P. says that he never had the opportunity to read a children's story that reflected his family.

"It's wonderful to see it happening in 'Love Without Wings,' he says. "As an adopted kid, being wanted is a key ingredient to feeling loved, and this book really sends that message."

Veronica Stanley Hooper, the book's illustrator, has created beautiful images with many details for an eager child to discover as their parents read this feel-good story about unconditional love, wishes and dreams come true.

"This unique story shares the elements of adopting a child through a heart-warming storyline," Hooper says. "And, while this tale is perfect for any family wanting to explain adoption to their children, it stands on its own as a classic fairytale too."

Adam Swain Ferguson discovered his calling for film and video production after moving to California in 2017, where he pursued a Bachelor's degree in Entertainment Business, and a Master's in Producing for Television. Now, he's channeling both his professional entertainment experience and innate talent as a storyteller, to produce children's content inspired by his own personal experiences with family growth; including adoption and IVF.

He hopes to continue on this path and to build additional storylines to represent his commitment to diversity by creating a series of book adaptations. He wants children to see themselves through his stories which will eventually showcase a host of different family dynamics and structures.

Currently, Ferguson lives in the greater Los Angeles area with his husband and their son.

This press release was issued on behalf of the news source, who is solely responsible for its accuracy, by Send2Press Newswire. To view the original story, visit: https://www.send2press.com/wire/new-book-celebrates-the-magic-of-adoption-and-diversity-through-creative-storytelling/