You are here: Home › Recession Fouls Basketball Superstar – A Playerâ€™s Loss is a Collectorâ€™s Gain at West Auctions
By California Newswire on April 28, 2009 in California News

SACRAMENTO, Calif. /California Newswire/ — There are times when a team transcends the game and steps over the boundaries of the sports pages and into the consciousness of a nation. It could be argued that the Chicago Bulls during the mid 1990’s was such a team - so well known that even people who never opened an issue of Sports Illustrated could name the starting lineup. The “repeat the three-peat” wins of the NBA finals of ‘96, ‘97, and ‘98 created a cadre of basketball superstars and characters and set the bar at a new high for the next generation of players. 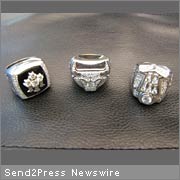 Now a little piece of that victory is up on the auction block. In a testament to the far reach of the recession, former Bulls guard and assistant coach to the Sacramento Kings Randy Brown has declared bankruptcy, and his three championship rings will be for sale to the highest bidder via online auction at www.WestAuction.com.

The Chicago Bulls of the mid ’90s has been considered one of the best teams ever to set foot on a court, and Brown’s role - both as guard and as a team player - was integral. Brown, who made a name for himself in Sacramento as a solid and hard-working assistant coach to the Kings, was well liked by players and fans alike. His focus and ability to help players get the most out of their training was a mainstay during the team’s recent trouble and instability.

Yet these hard financial times have impacted everyone, and Brown is no exception. “It’s a tough situation,” says Dennis West, of West Auctions, the company charged with auctioning the rings. “Randy seems like a really good guy, and he was a great player. However, these are tough times for a lot of people from a variety of backgrounds. People are making difficult financial decisions, and for some that means bankruptcy.” With bankruptcy rates rising rapidly across the nation, you can expect many more auctions in the future.

Brown’s three championship rings are expected to hit the auction block at www.WestAuction.com on May 19. The bid will start at $19,000 - a bargain in the world of sports collectables.