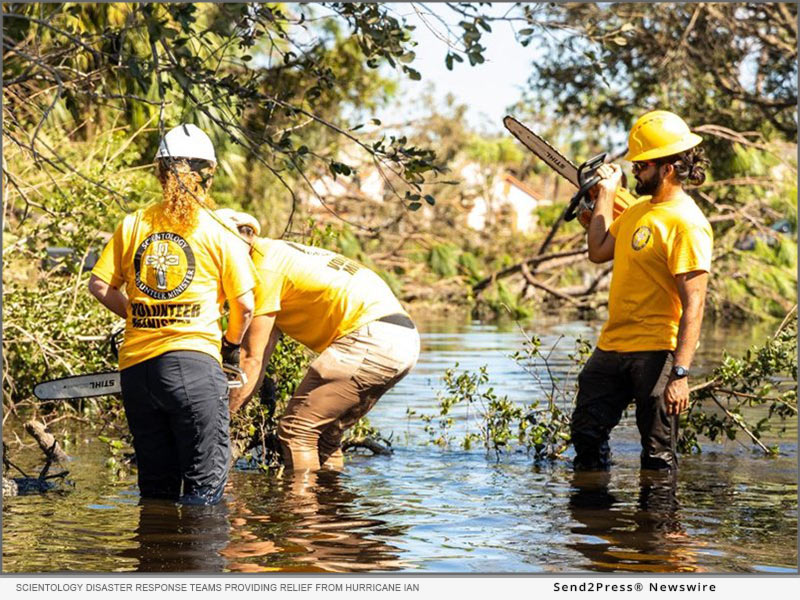 CLEARWATER, Fla., Oct 13, 2022 (SEND2PRESS NEWSWIRE) -- Scientology Volunteer Ministers continue their response in Southwest Florida to help those still struggling to recover from the worst storm to hit the area since 1935. When Hurricane Ian rampaged through Southwest Florida with 155 mph winds, it left devastation in its wake, killing at least 102 and creating economic havoc. As few as 9.4 percent of those living in some devastated areas are covered by flood insurance. Scientology Volunteer Ministers have been providing disaster relief since the storm passed through the region and their work is far from over.

"We came across a lot of people whose houses were demolished," said a Volunteer Minister who was among the first to arrive in the area. "They were without running water or power, so the water we handed out was super appreciated. We came up to a mobile home park that was totally demolished. As we were driving by, a woman was standing by the side of her home and we asked if she needed water. She didn't, but she desperately needed ice for her insulin or it would go bad."

The entire area was without power. The Volunteer Ministers had no idea where to get ice, so they drove around and finally found a store with enough ice to tide her over.

Volunteer Ministers equipped with chainsaws took on clearing away fallen trees and hanging branches. They cleared out streets so people could get into and out of their homes. They helped move families out of flooded areas to shelters or friends' homes.

It took another team of Volunteer Ministers many hours to clean out the debris from a woman's home and around her property. They sent her pictures of the house when they were done and she called them in tears, thanking them for their help. They cut down a tree that had fallen on another house and helped a 97-year-old veteran clear away the storm damage that covered his home.

Now two weeks later, there are still so many people in need of help, and the Volunteer Ministers continue to serve in North Port, Port Charlotte, Fort Myers and Orlando.

"We've been using the Crisis Clean-up website where people needing assistance can register for help," said one of the Volunteer Ministers. Using this site, they were directed to a trailer park. "It was heavily hit by the hurricane and several homes were severely damaged. We cleared away debris, cut down fallen trees, cleaned off roofs, and helped tarp the side of a house that had been ripped off, providing the home shelter from the elements."

Whether serving in their communities or on the other side of the world, the motto of the Scientology Volunteer Minister is "Something can be done about it." The program, created by Scientology Founder L. Ron Hubbard in the mid-1970s, is sponsored by the Church of Scientology International as a religious social service and constitutes one of the world's most significant independent relief forces.

The Volunteer Minister "helps his fellow man on a volunteer basis by restoring purpose, truth and spiritual values to the lives of others."

Tampa Bay Volunteer Ministers earned their reputation as "Hurricane Heroes" with an award from the Governor of Florida after their response to Hurricane Charlie in 2004: "This certificate is presented to Scientology Volunteer Ministers of Tampa Bay Hurricane Heroes, in recognition of exemplary efforts that not only benefit your local community but also lend truth to the belief that all citizens of Florida can make a difference in the lives of those they serve," it states.

They have continued to serve, responding to Hurricanes Rita and Katrina in 2005 and every local hurricane since, most recently Irma in 2017, Michael and Florence in 2018, as well as Hurricane Harvey in Texas in 2017, Maria in Puerto Rico in 2018, and Dorian in the Bahamas in 2019.

In June 2016, Scientology ecclesiastical leader Mr. David Miscavige dedicated the center for the Scientology Volunteer Ministers of Florida, along with a Scientology information center and six other humanitarian centers in downtown Clearwater. He said, "In times of disaster, whether affecting whole populations or a single household, our Volunteer Ministers prove on a daily basis that 'something can be done about it.' We do not discriminate. We do not judge. All we care to do is help. And, as demonstrated time and again, we deliver that help anywhere and everywhere."

For more information on the technology used by the Volunteer Minister in confronting and handling disasters, watch Scientology Tools for Life on the Scientology Network at DIRECTV 320 or at www.Scientology.tv.

This press release was issued on behalf of the news source, who is solely responsible for its accuracy, by Send2Press Newswire. To view the original story, visit: https://www.send2press.com/wire/scientology-disaster-response-team-florida-storm-victims-still-need-help/