You are here: Home › 31 dogs saved from a dog-meat breeding farm in China have arrived in the United States following year long CDC dog ban
By Send2Press Newswire on September 27, 2022 in Mass Media News 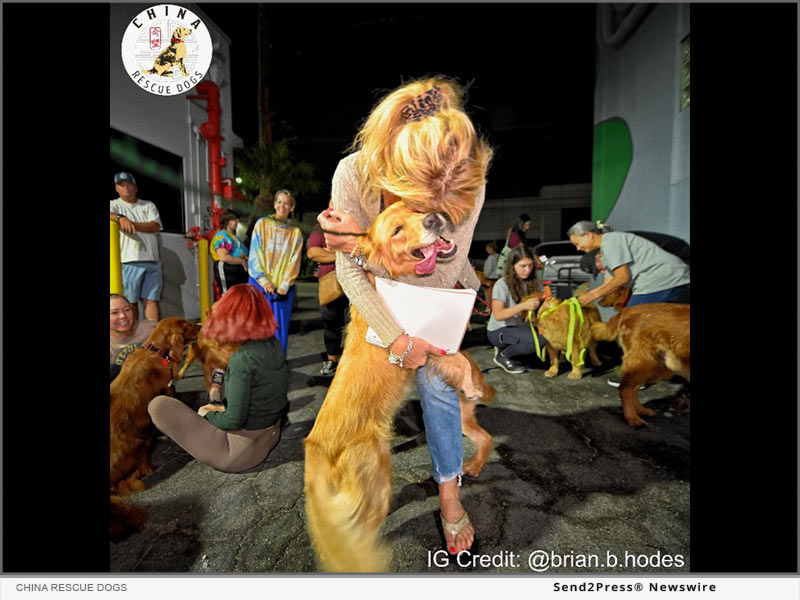 EL SEGUNDO, Calif., Sep 27, 2022 (SEND2PRESS NEWSWIRE) -- China Rescue Dogs, a 501(c)(3) organization, committed to rescuing and saving dogs from the slaughterhouses, meat trade, abuse, and neglect in China, has rescued into the U.S. the first large shipments of dogs from China following the Center for Disease Control and Prevention (CDC) dog ban.

"This truly was a global effort with teams from China, Canada and the United States all coming together to save these dogs from slaughter," acknowledged Jill Stewart, President and Founder of China Rescue Dogs.

The dogs were all saved in April 2022 from a dog meat breeding farm in China. Their rescue was featured by People: https://people.com/pets/china-rescue-dogs-saving-golden-retrievers-corgis/

"To know these dogs now have a second chance at life and will experience love for the first time, makes all the time spent on a project like this worthwhile," said Brandy Cherven, Vice President of China Rescue Dogs. "They were being sent to the slaughterhouse when we stepped in and saved them."

The dogs have spent the last three weeks stationed in Vancouver, Canada waiting for the final leg of their journey." Stewart adds, "We could not have accomplished this mission without the help of David MacNeil, CEO of WeatherTech, Nordstrom's, Dog is My CoPilot, and all our supporters. Dog is My CoPilot is a nonprofit that saves dogs from high kill shelters. The flight from Canada into the U.S. was their first international transport."

There are 10 other rescue organizations that have helped find these pups their forever homes. Of the 31 survivors now in the U.S., 16 are Golden Retrievers and 15 are Frenchie's and Pugs. Other dogs from the April 2022 rescue have already been adopted in Canada.

On July 14, 2021, the CDC suspended dogs imported from 113 countries, including China, due to the potential risk of spreading the canine rabies virus variant (CRVV.) Since that time, China Rescue Dogs has been saving dogs into Canada. This flight marks the first time since the CDC Dog Ban that a large shipment of dogs were granted permission to come into the U.S.

"We have worked closely with the CDC and the Animal and Plant Health Inspection Service (APHIS) to guarantee that all the dogs are healthy, properly vaccinated and tested against canine rabies," said Stewart. "We are honored that our best practices of doing what is best for the dogs was rewarded with their entry into the U.S."

If you would like more information on China Rescue Dogs, or to support their mission, please go to: https://chinarescuedogs.org/.

This press release was issued on behalf of the news source, who is solely responsible for its accuracy, by Send2Press Newswire. To view the original story, visit: https://www.send2press.com/wire/31-dogs-saved-from-a-dog-meat-breeding-farm-in-china-have-arrived-in-the-united-states-following-year-long-cdc-dog-ban/