You are here: Home › Community Comes Together in Support of the LAPD and a Cleaner and Safer Hollywood
By Send2Press Newswire on October 12, 2022 in Mass Media News 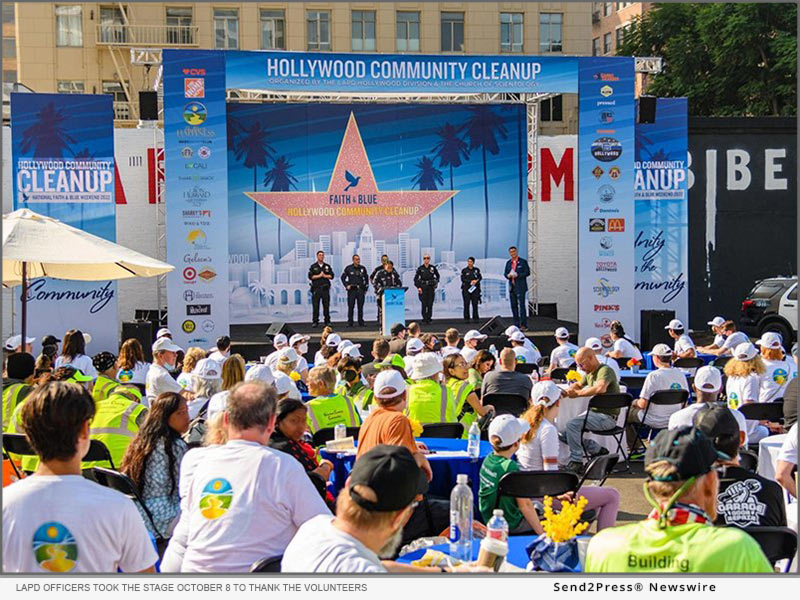 HOLLYWOOD, Calif., Oct 12, 2022 (SEND2PRESS NEWSWIRE) -- With violent crime on the rise in Los Angeles, more than 50 local businesses, nonprofits and faith-based organizations joined the LAPD in a community coalition on Faith & Blue Weekend to reclaim the streets of Hollywood with a neighborhood cleanup launched by the Hollywood Community Police Station and co-organized by the Church of Scientology.

October 8 was no ordinary Saturday morning in Hollywood. As crowds gathered in the Capitol Records Building parking lot, tourists and locals soon realized something special was happening. Was it the presentation of a new star on the Hollywood Walk of Fame? Or an unexpected movie premiere? No. This was the launch of a coalition of more than 50 organizations that decided to take back the streets of Hollywood.

More than 460 volunteers gathered for a community cleanup -- the largest ever done in the area. Two local businesses donated the space and parking for the event that was organized by the LAPD and the Church of Scientology on National Faith & Blue Weekend under the banner "Unity in the Community."

The purpose of Faith & Blue Weekend is to create safer and stronger communities by engaging law enforcement officers and local residents through the connections of faith-based organizations.

Hollywood LAPD Captain Yasir Gillani welcomed the volunteers, thanking them and the many LAPD officers for their support of the project. He gave a special shout-out to the Church of Scientology for bringing the community together to support the program.

Faith & Blue founder Rev. Markel Hutchins, in Los Angeles from Atlanta, Georgia, to launch the Los Angeles Faith & Blue Weekend celebrations, spoke of a turnout like this being proof that when faiths, communities and law enforcement work together, we can bridge differences, increase collaboration and reduce bias and violence.

Those coming on board for a cleaner, safer and more beautiful Hollywood included the Hollywood Chamber of Commerce, the Hollywood Partnership, the L.A. Office of Community Beautification, the L.A. Department of Sanitation, and numerous local businesses and faith-based organizations.

The volunteers divided into seven teams, each headed by an LAPD Hollywood Division officer. The City of Los Angeles Department of Sanitation and Home Depot equipped them with bags, shovels, brooms and trash pickers.

The trash was carried away by one of the L.A. Department of Sanitation's new zero-emission all-electric garbage trucks.

As the teams returned to the Vine Street staging area at noon, they were serenaded by a mariachi band while they enjoyed a complimentary lunch provided by local businesses including Pinks Hot Dogs, In-N-Out Burger, Tommy's Hamburgers, Domino's Pizza, Sharky's and Fresh Brother's Pizza.

The Church of Scientology, LAPD and The Way to Happiness Foundation have partnered in monthly neighborhood cleanups since 2018, including a special annual scouring of Hollywood Boulevard on the eve of each year's Hollywood Christmas Parade.

After each cleanup, volunteers hand out copies of The Way to Happiness, written by humanitarian and Scientology Founder L. Ron Hubbard. The Way to Happiness is a common-sense nonreligious moral code with 21 precepts to guide people to make better choices in their lives. With precepts such as "Set a Good Example," "Safeguard and Improve Your Environment," "Be Worthy of Trust" "Fulfill Your Obligations" and "Be Industrious," The Way to Happiness encourages people to point the way to a moral, less dangerous and happier life.

National Faith & Blue Weekend was created to facilitate safer, stronger, more just and unified communities by directly enabling local partnerships among law enforcement professionals, residents, businesses and community groups through local faith-based organizations. These connections are built through activities held in neighborhoods of every kind across the United States, jointly hosted by houses of worship and local law enforcement entities.

This press release was issued on behalf of the news source, who is solely responsible for its accuracy, by Send2Press Newswire. To view the original story, visit: https://www.send2press.com/wire/community-comes-together-in-support-of-the-lapd-and-a-cleaner-and-safer-hollywood/