You are here: Home › From the Clash of Race and Creed: Award-winning composer, Brian Field, releases musical tracks of hope and love
By Christopher Laird Simmons on June 17, 2021 in Featured, MuseWire

NEW YORK, N.Y. /MUSEWIRE – Music Industry Newswire/ — Olim Music is proud to announce the release of two tracks by award-winning composer Brian Field: “From the Clash of Race and Creed” for orchestra, and “Senex Puerum Portabat” for choir, both released worldwide on Apple Music, Spotify, Amazon Music, Google Music and all digital platforms on April 26, 2021. 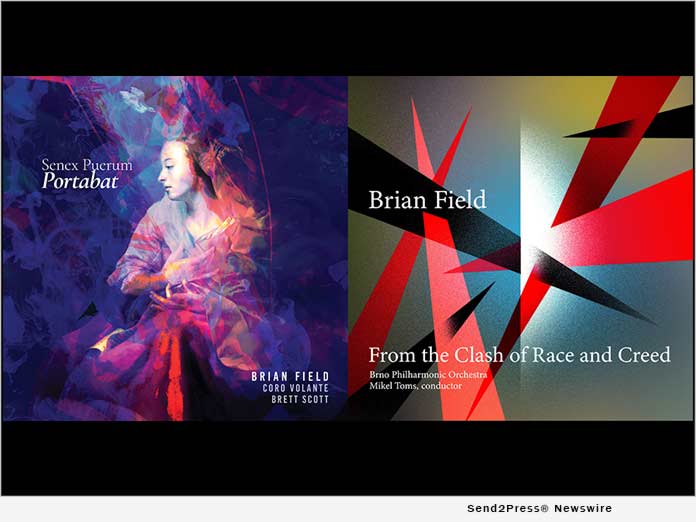 The work “From the Clash of Race and Creed” was originally inspired by the tragic events of September 11, 2001 and derives its title from the couplet in the hymn “Not alone for mighty empire,” by William Merrill in 1911 which reads: “God of justice, save the people / From the clash of race and creed.” This orchestral work juxtaposes the sometimes troubling, and often complex, dissonant aspects of today’s reality filled with conflict, worry and hatred with the hopeful and ideal world of salvation, freedom and universal brotherhood. The recording features the Brno Philharmonic Orchestra under the celebrated conductor, Mikel Toms.

The second track, “Senex Puerum Portabat,” is a work for mixed choir. In this fusion of old and new musical traditions, Field pays homage to a cappella practices and text from centuries ago, combining these with more modern harmony. Colin Clarke, Fanfare Magazine, comments: “Contemporary interest in the Divine Feminine seems reflected in Brian Field’s ‘Senex puerum portabat,’ a setting of an antiphon to the Magnificat at First Vespers for the Purification of the Blessed Virgin Mary. It is also a tale of a mother’s love, and that aspect is enshrined in Field’s interior harmonies, with their delicious dissonances.” The recording is performed by Cor Volante under the direction of Brett Scott.

For more information on the tracks:

“From the Clash of Race and Creed” http://olimmusic.com/brian-field-from-the-clash-race-creed/

Brian Field’s music is an eclectic fusion of lyricism and driving rhythm that brings together elements of post-romanticism, minimalism and jazz. A graduate of Connecticut College and the Juilliard School in New York City with a doctorate from Columbia University, Field has studied with Noel Zahler, Milton Babbitt, George Edwards and Mario Davidovsky, among others. A recipient of dozens of awards, his compositions are widely performed, recorded, and distributed worldwide. He has written music for solo, chamber ensemble and orchestra, ballet, stage and television.

For more about Field: https://www.brianfield.com/

The post From the Clash of Race and Creed: Award-winning composer, Brian Field, releases musical tracks of hope and love appeared first on MuseWire.