LOS ANGELES, Calif. /California Newswire/ — The Golden State Pops Orchestra announces director David E. Talbert, voice actor Bill Rogers, and singer Drew Tablak as special guests for the “Holiday POPS Spectacular” on Saturday, December 18, 2021 at 8 p.m. The concert will be held at the Warner Grand Theatre in San Pedro, Calif., and will include two world premieres: A musical suite from the movie “Jingle Jangle: A Christmas Journey,” and a new work for narrator and orchestra based on music from the motion picture “Elf” titled “How Buddy the Elf Saved Christmas.” 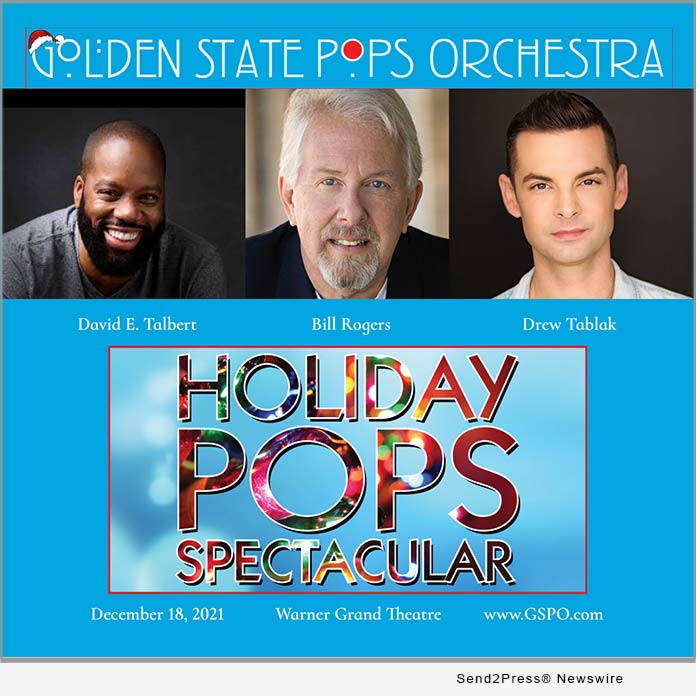 Having written, directed, and produced 14 national stage productions, 5 blockbuster studio films, and 3 best-selling novels, David E. Talbert is one the industry’s most creative minds and brilliant forces. Talbert’s most recent work, his twenty year passion project, Netflix’s “Jingle Jangle: A Christmas Journey,” skyrocketed to international acclaim, premiering in 191 countries, and translated into 32 languages. Shortlisted by the Oscars and voted by Rotten Tomatoes as the Best Reviewed Family film of 2020, this groundbreaking musical extravaganza boasts a who’s who list of Oscar, Tony, Emmy and Grammy winners, featuring a sweet and soaring score by the maestro John Debney.

About John Debney’s score early in “Jingle Jangle: A Christmas Journey,” Talbert told Maestro Fox, “Debney threw in these strings in this beautiful suite that got us into Jangle’s, and that really got the party started. It was this orchestral [music] mixing with this African vibe… We wanted to have this orchestral bottom, but give them this sense of royalty.”

Drew Tablak’s critically acclaimed vocal ability and performance versatility has given him the privilege to perform all over the world. A graduate from Azusa Pacific University with his degree is Voice Performance, he has had the honor of being a guest soloist for the Long Beach Pops Symphony Orchestra, The Premier Chorale of Los Angeles, The Pacific Symphony, The Orange County Symphony and The Golden State Pops. He has been a soloist at Carnegie Hall and has also made guest appearances on Glee and on American Horror Story. He was also a featured guest on the Emmy nominated PBS special, “Songs Of A Lifetime.”

An accomplished a cappella singer and in-demand clinician, Drew has worked with multiple winners of the Sing Off, Take 6, numerous other collegiate and professional groups, and currently sings with the world famous group M-Pact. Working for Disney Entertainment, he has performed in a number of various shows, recording studios, and live concerts.

He was the soloist at the ground breaking ceremony for Disneyland Shanghai and was recently privileged to be the soloist for the Disney Candlelight Processional. He currently works in the world famous Dapper Dans, and proudly sang with The Mad T Party Band and the illustrious Voices of Liberty. Drew had a successful run as Mary Sunshine in the musical Chicago at the Hollywood Bowl, directed by Brooke Shields and also toured with It Gets Better the Musical, a project dedicated to the prevention of bullying and suicide. Drew has also released A Holiday record, “What Christmas Means To Me,” as well as being featured on numerous other recording projects. He proudly owns the Drew Tablak Vocal Studio.

Bill Rogers is a Southern California-based Voice Actor who narrates TV shows like: “Strange,” “Most Haunted In America,” and National Geographic’s “The Shadow Wolves.” If you’re being trained for automotive dealership work, his “here’s the straight line” voice is there to show you “the ropes.” Bill talks to doctors, dentists, veterinarians, and other medical pros… for sales and training plus new advancements in medicine. If your travel includes airlines, he talks about destinations and lifestyles. Bill is also a busy commercial voice with clients around the world.

The Holiday Pops Spectacular tradition returns with joyous music and a festive atmosphere to put you in the holiday spirit. Maestro Steven Allen Fox, and choir director, Maestra Marya Basaraba, invite you to join the fun. The evening will include special guests, incredible music performed by the entertaining GSPO and GSPO Chorale, and even a little snow. Including a Suite from the Netflix holiday hit, “Jingle Jangle: A Christmas Journey” (world premiere), “How Buddy the Elf Saved Christmas” (world premiere), three songs from “Home Alone,” Suite from “Polar Express,” “O Holy Night,” “God Bless Us Everyone,” “A Christmas Sing-Along,” “In the Bleak Midwinter” and “Silent Night.”

With a driving mission to create, develop and present innovative and fresh orchestral concerts, the Golden State Pops Orchestra (GSPO) is quickly becoming nationally known as a pioneer in providing quality film music with a second life on the concert stage, in productions that absorb audiences from beginning to end. The orchestra performs a wide variety of musical repertoire, including classical, Broadway, pop music and even video game soundtracks. However, the primary focus of the GSPO remains film music, a specialty of the orchestra since its founding in 2002.

The orchestra is composed of professional freelance musicians from around the Los Angeles area and operates under a Metropolitan Agreement with the American Federation of Musicians, Local 47. One of GSPO’s core values is the continuous advancement of our artistic capacity and production values, while maintaining a focus on high-quality performance. We work constantly to build even more relationships with composers and entertainment industry professionals, and to bring our unique brand of entertainment to world-renowned venues throughout Southern California.