You are here: Home › Gov. Schwarzenegger and Secretary Salazar Sign MOU to Expedite Renewable Energy Development in Calif.
By California Newswire on October 12, 2009 in California News

SACRAMENTO /California Newswire/ — Further laying the groundwork for California to reach its environmental goals, Governor Arnold Schwarzenegger today signed a memorandum of understanding (MOU) with U.S. Secretary of the Interior Ken Salazar in order to expedite the siting of California renewable energy projects. California is the first state to sign an MOU with the Department of the Interior (DOI) to cooperatively develop long-term renewable energy plans and to sheppard eligible projects through state and federal permitting processes that can receive 30 percent federal tax credits under the American Reinvestment and Recovery Act (Recovery Act). 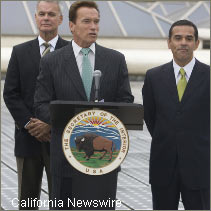 â€œCalifornia is showing the world how to protect the economy, environment and habitat all at the same time,â€ said Governor Schwarzenegger. â€œWe know our future is in clean power, clean energy and clean technology, and we are taking action so California will be able to meet its ambitious renewable energy and environmental goals. Todayâ€™s first-of-its-kind agreement with our federal partners will also create jobs and get projects moving while maintaining high environmental standards.â€

The MOU commits the federal government to work with California on a science-based process for reviewing, approving and permitting renewable energy applications in California, which will greatly help the state achieve its goal of reaching 33 percent renewable energy by 2020. The DOI and California Natural Resources Agency will develop detailed maps of the best areas for development and conservation â€“ allowing for expedited project siting and habitat protection. The agreement also facilitates the identification of transmission corridors by December 2010 and includes the Department of Defense (DOD) in the process because some transmission lines may need to cross DOD lands.

â€œWith coordinated environmental studies, good land-use planning and zoning and priority processing, we can accelerate responsible renewable energy production on U.S. public lands in California,â€ said U.S. Secretary of the Interior Ken Salazar. â€œTogether we can strengthen our nationâ€™s and Californiaâ€™s energy security, protect our environment and help lay the foundation for a clean-energy economy for the 21st century.â€

In addition to a broad commitment to work together, the parties of the MOU also agree to expedite projects that are on track to break ground by the end of 2010 and become eligible for more than $15 billion in Recovery Act funding. The Recovery Act specifically directs economic stimulus funding to qualified projects that begin construction by December 1, 2010. At the direction of the MOU, the Renewable Energy Policy Group will review a list of projects to be identified for this stimulus funding that if constructed, could add up to over 7,000 megawatts of new wind, solar and geothermal energy in California.

Under Governor Schwarzeneggerâ€™s leadership, California has led the nation and the world in establishing laws and policies aimed at promoting renewable energy and helping to fight global warming. Just last month, Governor Schwarzenegger signed an executive order directing the California Air Resources Board to adopt regulations increasing Californiaâ€™s Renewable Portfolio Standard (RPS) to 33 percent by 2020 â€“ a goal that was first established by the Governorâ€™s directive last year. The order will ensure California will have the flexibility needed to use renewable energy sources for 33 percent of our energy consumption by 2020 and places the highest priority on renewable resources that will provide the greatest environmental benefits that can be developed quickly and support reliable, efficient and cost-effective electricity system operations including resources and facilities located throughout the Western Interconnection.

Other accomplishments cementing California as a great leader on protecting the environment include:
â€¢In 2008, Gov. Schwarzenegger signed AB 1451, AB 2466 and AB 2267 to build on Californiaâ€™s commitment to increase renewable energy use. AB 1451 builds on the stateâ€™s solar power usage by continuing a property tax exclusion for projects that utilize solar panel energy and expanding the exclusion to builder-installed solar energy systems in new homes. AB 2267 builds on the stateâ€™s green economy by requiring the California Public Utilities Commission to grant incentives to eligible California-technology manufacturers. This bill also requires the CEC to give priority to California-based companies when granting awards and will not only create jobs for hardworking Californians but will attract more clean-tech and green-tech companies to the state. AB 2466 will increase energy efficiency and help protect the environment by authorizing local governments to receive a utility bill credit for surplus renewable electricity generated at one site against the electricity consumption at other sites.

â€¢In 2006, the Governor signed the Global Warming Solutions Act of 2006, Californiaâ€™s landmark bill that established a first-in-the-world comprehensive program of regulatory and market mechanisms to achieve real, quantifiable and cost-effective reductions of greenhouse gas emissions. The law will reduce carbon emissions in California to 1990 levels by the year 2020. AB 32 requires CARB to develop regulations and market mechanisms that will ultimately reduce California’s greenhouse gas emissions by 25 percent by 2020. Mandatory caps will begin in 2012 for significant sources and ratchet down to meet the 2020 goals. The Governor has also called for the state to reduce carbon emissions to 80 percent below 1990 levels by the year 2050.

â€¢In 2006, the Governor announced his Million Solar Roofs Plan to provide 3,000 megawatts of additional clean energy and reduce the output of greenhouse gases by three million tons, equivalent to taking one million cars off the road. Now known as the California Solar Initiative, the $3.3 billion incentive plan for homeowners and building owners who install solar electric systems will lead to one million solar roofs in California by 2017.

â€¢The Governor announced as a component of the California Solar Initiative in 2007, the New Solar Homes Partnership (NHSP) aimed to help create a self-sustaining market for solar homes and gain builder commitment to install solar energy systems. A new home that qualifies for the NSHP is at least 15 percent more efficient than the current building standards.

Californiaâ€™s leadership in pushing to fight global warming and increase renewable energy will help boost our economy. According to an economic study by the University of California at Berkeley and Next 10, California’s policies will create as many as 403,000 jobs in the next 12 years and household incomes will increase by $48 billion.