You are here: Home › Help End the Drug Abuse Crisis: Learn How on the Scientology Network
By Send2Press Newswire on June 22, 2022 in Mass Media News 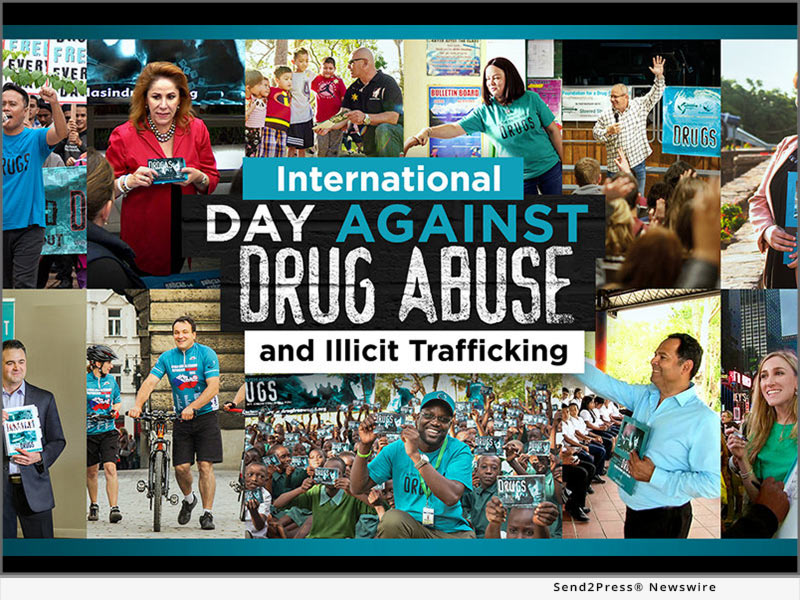 LOS ANGELES, Calif., Jun 22, 2022 (SEND2PRESS NEWSWIRE) -- The United Nations set aside June 26 as International Day Against Drug Abuse and Illicit Trafficking "to promote action and cooperation toward the goal of an international society free of drug abuse." And at no time has it been more urgent to do so. The Scientology Network marks the day by focusing on humanitarians who are working to end the drug abuse crisis in towns and cities across the world.

According to a study published in 2018, illicit drug use was responsible for over 750,000 deaths per year. In the U.S. alone, Centers for Disease Control and Prevention indicate that more than 105,000 lives were lost due to overdose in 2021. Little wonder that the United Nations Office of Drugs and Crime (UNODC) is calling for "urgent action to protect people, including by strengthening drug use prevention...." And this is why they selected #CareInCrises as this year's slogan for International Day Against Drug Abuse and Illicit Trafficking.

A global problem demands a global solution. Which is why the Church of Scientology developed the Truth About Drugs, now one of the world's largest nongovernmental drug information and prevention initiatives. In 2006, Foundation for a Drug-Free World, a secular nonprofit corporation, was formed to serve as the primary distributor of the educational materials and to develop new materials to meet the challenge of continually changing drug trends.

Scientology Network is marking this year's International Day Against Drug Abuse and Illicit Trafficking by featuring episodes of the original series "Voices for Humanity," documenting the work of drug-prevention activists who are saving lives:

* On the streets of Los Angeles, former addict David Sanchez uses Foundation for a Drug-Free World materials to give kids the street smarts they need to make the right choice about living drug-free. "I knew that I had to find a way to educate people," he says. "Knowing about something that could hurt you is half the battle of being able to defeat it."

* Some 8,700 miles away in Malaysia, Khai Aziz, lead singer of the hard-core straight-edge punk band Second Combat, uses his music to spread the message to youth that there's nothing cool about using drugs. Straight edge is hardcore punk whose adherents refrain from using drugs. And with drug dealers targeting younger and younger children, Aziz is fighting back, using the Foundation's Truth About Drugs initiative to reach kids in school.

* Lithuanian-born Ingrida Lingyte's life was changed forever when her mother was killed and her sister paralyzed in an accident caused by a drunk driver. Years later, on a visit to Colombia, she fell in love with the country and made it her home. To combat Colombia's drug culture and the suffering it causes, Lingyte and her team have reached one-fifth of the country's population with the Truth About Drugs. And they're still going strong.

Episodes on these and many more drug-prevention activists will be airing throughout the day, showing how people from all walks of life, nationalities and affiliations are using the Truth About Drugs initiative to raise awareness about drugs and help people make the decision to live drug-free lives.

According to the United Nations Office on Drugs and Crime, "Prevention strategies based on scientific evidence working with families, schools, and communities can ensure that children and youth, especially the most marginalized and poor, grow and stay healthy and safe into adulthood and old age. For every dollar spent on prevention, at least ten can be saved in future health, social and crime costs."

Noting the role substance abuse plays in the disintegration of the social fabric, Scientology Founder L. Ron Hubbard wrote, "Research has demonstrated that the single most destructive element present in our current culture is drugs."

Foundation for a Drug-Free World was formed in 2006 to serve as the primary distributor of educational materials and to develop new materials to meet the challenge of continually changing drug trends. The Foundation has grown to a network of some 200 chapters around the world. Thanks to the support of the Church of Scientology and Scientologists, it provides the Truth About Drugs secular program and materials free of charge to drug educators worldwide.

"Voices for Humanity" is a Scientology Network original series of short documentaries introducing changemakers from all faiths, cultures and nations as they extend help to their communities through Scientology-sponsored humanitarian programs.

This press release was issued on behalf of the news source, who is solely responsible for its accuracy, by Send2Press Newswire. To view the original story, visit: https://www.send2press.com/wire/help-end-the-drug-abuse-crisis-learn-how-on-the-scientology-network/