You are here: Home › PBS SOCAL and OUR L.A. Present ‘Bridging the Divide: Tom Bradley and The Politics of Race
By Send2Press Newswire on October 5, 2022 in Mass Media News 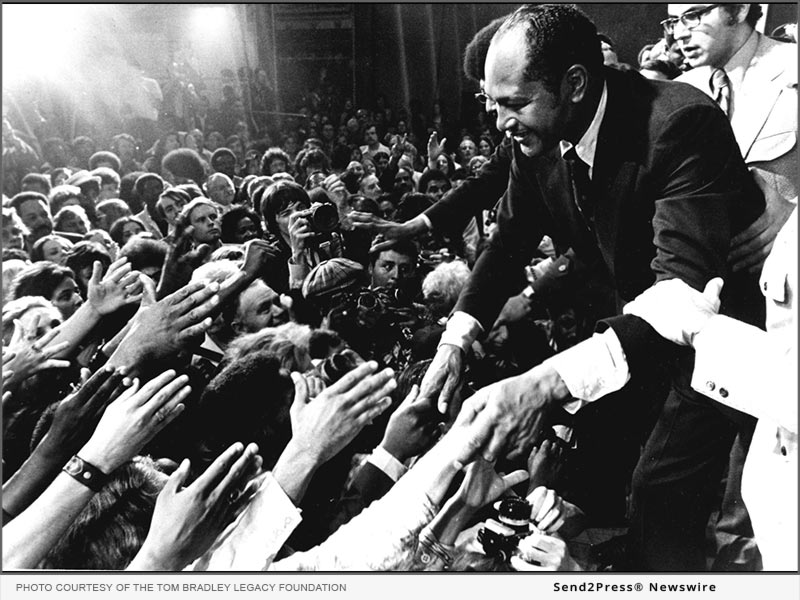 LOS ANGELES, Calif., Oct 05, 2022 (SEND2PRESS NEWSWIRE) -- "Bridging the Divide: Tom Bradley and the Politics of Race" reveals the life and legacy of the first African American mayor elected in a major American city, with an overwhelmingly white majority, and will be broadcast on PBS SoCal on Thursday, October 6 at 8:30 p.m., Our L.A. announced today. The encore presentation of the award-winning documentary is being released during another historic Los Angeles mayoral race occurring now. It is also available on PBS.org, and on PBS and World Channel's Saturday Playlist Initiative on race.

"Bridging the Divide: Tom Bradley and the Politics of Race" tells the little-known story of Los Angeles Mayor Tom Bradley whose 1973 election was a remarkable political first in the history of race and politics in America. The documentary raises important issues about race, identity, and coalitions, and is especially relevant at this time when the nation is still at a tipping point in the struggle against racial injustice and police brutality.

Featuring never-before-seen historical footage and photographs, "Bridging the Divide: Tom Bradley and the Politics of Race" examines the creation of Bradley's extraordinary multi-racial coalition of African Americans, Jews, white liberals, Latinos, and Asian Americans, which redefined Los Angeles, transformed the national dialogue on race, and set the foundation for sustainable coalitions that encouraged the elections of minority candidates nationwide, most notably President Barack Obama. At the same time, the film examines the complexities and contradictions of Bradley's career as a bridge builder.

Produced by Academy Award®-nominated filmmaker Lyn Goldfarb and multiple Emmy® Award-winning filmmaker Alison Sotomayor, "Bridging the Divide: Tom Bradley and the Politics of Race" also brings into sharp focus the issues of police brutality in minority communities and the challenges of police reform, and shows how Tom Bradley, a former police officer whose political aspirations were shaped by the Watts Rebellion, could not break the cycles of poverty and despair that would ultimately spark the 1992 Los Angeles civil unrest, and mark the end of his era.

Narrated by Emmy® Award-winning actress Alfre Woodard, with an original score composed by Stephen James Taylor, "Bridging the Divide: Tom Bradley and the Politics of Race" is a human story about struggle and success, conflict, and community. It is a classic, American story of determination against seemingly insurmountable odds; the story of a black man, the son of sharecroppers and grandson of a slave who fought poverty, prejudice, and bigotry to bridge racial divides. It is the story of the pressures which face our cities, the challenges of diversity, and the complexities of coalitions in a changing America.

"We are honored to return to PBS SoCal, during a mayor's race with many parallels to Tom Bradley's breakthrough campaign," says Lyn Goldfarb, the documentary's director, writer, and producer. "We believe in the power of storytelling and the value of our shared history. Tom Bradley's story is part of a critically important narrative for the City of Los Angeles and the nation in how he transformed American politics by bridging racial and ethnic divides."

"Remarkably, Tom Bradley's story is still not being taught in our schools, and our history books often exclude his significance in the national political landscape," remarks Alison Sotomayor, the documentary's producer, writer, and research director. "'Bridging the Divide' will provide a unique, historical perspective to illuminate our understanding of race and multi-ethnic coalition building in America. The story of Tom Bradley, no doubt, will encourage thoughtful reflection and conversation that will deepen our awareness of our lives and our world."

"Bridging the Divide: Tom Bradley and the Politics of Race" is streaming on Kanopy.com for free with a library card thanks to the support of participating libraries, colleges, and universities.

The documentary is also available on pbs.org. The website, https://www.mayortombradley.com/, provides an extensive look at Tom Bradley's life and legacy.

Lyn Goldfarb is an Academy Award-nominated and award-winning independent documentary filmmaker, with 19 films broadcast nationally on PBS and major cable. Goldfarb produced "The First Attack Ads: Hollywood vs. Upton Sinclair" which will have its PBS SoCal premiere on October 6. Her Emmy-nominated "Eddy's World" played at more than 40 film festivals, winning Best Short Documentary at the Port Townsend Film Festival, and is featured on The New Yorker's site.

Her feature films include: "With Babies and Banners: Story of the Women's Emergency Brigade"; "Danger: Kids at Work"; "People in Motion"; "The New Los Angeles"; "Bridging the Divide: Tom Bradley and the Politics of Race"; and the series: "The Roman Empire in the First Century, Japan: Memoirs of a Secret Empire," and "California and the American Dream." She has received an Academy Award nomination; an IMAGEN nomination; two Emmy Awards; a George Foster Peabody Award; 2 DuPont Columbia Awards; the Emily Grand Prize, the American Film Festival; CINE Golden Eagle; a Silver Telly; 3 Bronze Telly Awards and many others. Her films have been featured in film festivals worldwide. She is a member of the Academy of Motion Picture Arts and Sciences, WGA/w, the DGA, the Academy of Television Arts & Sciences, the International Documentary Association, and the Alliance of Women Directors.

Alison Sotomayor is an Emmy® Award-winning filmmaker whose work promotes social change and explores tough issues confronting people of color. She was the producer for the 2018 PBS documentary, The Rise and Fall of the Brown Buffalo, directed by veteran filmmaker Phillip Rodriguez and executive produced by Benicio del Toro. Previously, Sotomayor was a producer for the critically acclaimed, news and public affairs series, Life & Times at KCET in Los Angeles, the director of communications and film producer for the National Hispanic Media Coalition, and the experiential marketing director for LATINAFest.

Some of her most notable television and independent works include "Sal Castro & the 1968 East L.A. Walkouts"; "Heroes in the Hood: Father Gregory Boyle"; "The Story of the L.A. Fire Department Desegregation"; "A New Vision for the I.O.C.: Anita DeFrantz"; "Coach John Wooden: The Legend, The Legacy, Women Air Force Service Pilots, WWII"; "Five Years After L.A.'s 1992 Riots and Revolving Door: California's Mentally Ill."

Sotomayor participated in the inaugural CPB/WETA News Academy in Washington D.C. and is a member of the Academy of Television Arts & Sciences, California Chicano News Media Association, La Plaza de Cultura y Artes, Film Independent, and the National Association of Latino Arts and Cultures. She is the founder of Moxie Media Productions, and has earned two Emmy Awards, five Golden Mikes, a Telly Award, and a B.A. in Sociology from UCLA.

THIS FILM WAS MADE POSSIBLE WITH THE ASSISTANCE OF THE FOLLOWING SPONSORS:

National Endowment for the Humanities (NEH) is an independent federal agency created in 1965. It is one of the largest funders of humanities programs in the United States. NEH serves and strengthens our republic by promoting excellence in the humanities and conveying history lessons to all Americans. The Endowment accomplishes this mission by awarding grants for top-rated proposals examined by panels of independent, external reviewers. NEH grants typically go to cultural institutions, such as museums, archives, libraries, colleges, universities, public television, and radio stations, and to individual scholars.

California Community Foundation (CCF) in Los Angeles has been an essential community advocate in the region since 1915. With more than $1 billion in assets, CCF is one of the largest foundations of any kind in the nation. As a community foundation, CCF is a tax-exempt, public nonprofit organization committed to transformative change across Los Angeles and around the world.

W.K. Kellogg Foundation (WKKF) was established in 1930 by breakfast cereal pioneer Will Keith Kellogg, who defined its purpose as "...administering funds for the promotion of the welfare, comfort, health, education, feeding, clothing, sheltering and safeguarding of children and youth, directly or indirectly, without regard to sex, race, creed or nationality...." Over the years, the WKKF's programming has continued to evolve, striving to remain innovative and responsive to the ever-changing needs of society. Today, the organization ranks among the world's largest private foundations.

The Ralph M. Parsons Foundation improves the well-being of Los Angeles County residents by investing in quality nonprofit organizations responding to people's social, civic and cultural, health, and educational needs. The foundation's approach recognizes that museums and arts programs are as important to the collective well-being as after-school services, community clinics, and food banks. The foundation invests in excellence in social services, health care, the arts, and higher education in Los Angeles County.

OUR L.A., a 501(c)(3) non-profit corporation, is dedicated to increasing public awareness of historical and contemporary stories in Los Angeles that help shape our lives, our community, and connect people to a place and to one another. http://our-la.com/.

PBS, with 350 member stations, offers all Americans the opportunity to explore new ideas and new worlds through television and online content. Each month, PBS reaches more than 103 million people through television and over 33 million people online, inviting them to experience the worlds of science, history, nature, and public affairs; to hear diverse viewpoints, and to take front row seats to world-class drama and performances. Learn more: https://www.pbs.org/.

This press release was issued on behalf of the news source, who is solely responsible for its accuracy, by Send2Press Newswire. To view the original story, visit: https://www.send2press.com/wire/pbs-socal-and-our-l-a-present-bridging-the-divide-tom-bradley-and-the-politics-of-race/