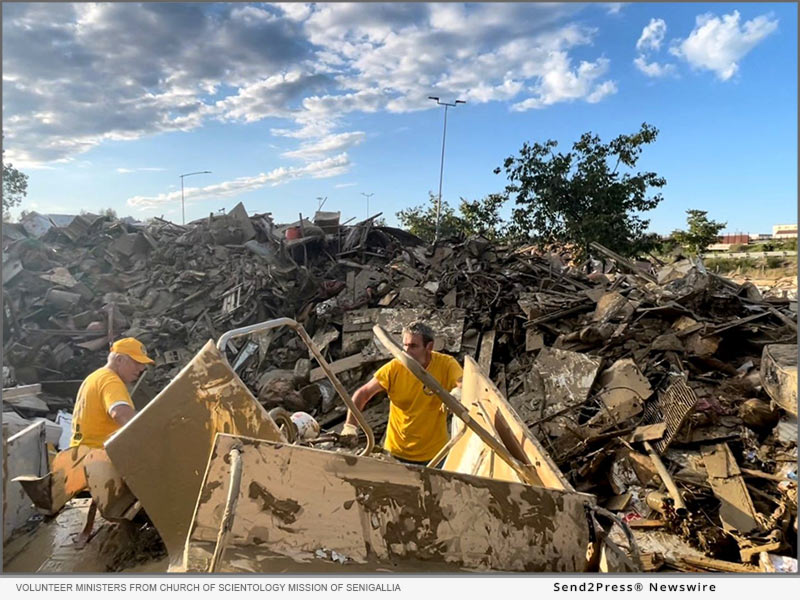 SENIGALLIA, Italy, Sep 29, 2022 (SEND2PRESS NEWSWIRE) -- Tragedy struck the commune of Senigallia, and local Scientologists responded immediately to help the community recover from the worst floods ever to hit the town. Ever since the eastern coast of Italy was devastated by a flash flood September 16, Scientology Volunteer Ministers have been hard at work providing help.

Some of the worst of the recent flooding in Italy hit the town of Senigallia, where the River Misa overflowed its banks.

Although alerted to rain, it was far greater than predicted. Local residents did not expect the violence of the storm, which dumped between 16 and 19 inches of rain on the region in two or three hours. An Interior Ministry official in Ancona described the rainfall as a "water bomb that exploded." A local mayor said it was more like a tsunami. In just a few hours, the region was inundated with as much rainfall as it usually receives in six months.

Streets became rivers that carried away everything in their path. At least 10 people died.

When floodwaters receded, the cleanup began, and the Scientology Volunteer Ministers responded immediately and have been helping their community dig out from the mud and water damage ever since.

Whether serving in their communities or on the other side of the world, the motto of the Scientology Volunteer Minister is "Something can be done about it." The program, created by Scientology Founder L. Ron Hubbard in the mid-1970s, is sponsored by the Church of Scientology International as a religious social service and constitutes one of the world's most significant independent relief forces.

The Volunteer Minister "helps his fellow man on a volunteer basis by restoring purpose, truth and spiritual values to the lives of others."

The Scientology Network features Scientology: Tools for Life, an introduction to the basic principles and technology that comprise the training of the Volunteer Minister. These films present practical tools anybody may learn and use to overcome problems, live a happier life, and better the lives of those around them.

The Scientology Network is available on DIRECTV Channel 320 and can be streamed at Scientology.tv, on mobile apps and via the Roku, Amazon Fire and Apple TV platforms. Since launching with a special episode featuring Scientology ecclesiastical leader Mr. David Miscavige, Scientology Network has been viewed in 240 countries and territories worldwide in 17 languages.

This press release was issued on behalf of the news source, who is solely responsible for its accuracy, by Send2Press Newswire. To view the original story, visit: https://www.send2press.com/wire/scientology-volunteers-help-neighbors-battered-by-record-italian-floods/