LOS ANGELES, Calif. /California Newswire/ — According to data from thousands of recent sleep survey respondents, SleepBook has found that residents in Southern California are just not getting enough ZZZs. Visitors to SleepBook.com are asked to fill out a short survey about their sleep habits, after which they are able to download a customized sleep book full of personal suggestions for improving sleep duration and quality. 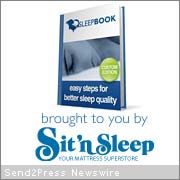 To date, almost 13,000 people have responded to the Sleep Book survey, and the numbers indicate that lack of sleep is an acute problem among Southern California sleepers.

Insomnia, lack of energy and frequent waking are all top concerns. 48 percent of Sleep Book survey respondents have had eight or more sleepless nights during the past year; 84 percent report not having enough energy during the day; and 76 percent report frequently waking up during the night.

Sit ‘n Sleep, the sponsor of SleepBook, launched the Web site in early April to provide support and advice for Southern California sleepers.

Larry Miller, president of Sit ‘n Sleep, says that there are many factors that can contribute to a poor night’s sleep; a poor mattress being one of them.

“People already have enough to worry about,” Miller says. “And when compounded with things like a bad economy and soaring unemployment rates, this only adds to more sleepless nights.”

In fact, a recent report that appeared in the Los Angeles Times reported that sleeping pill use has increased as a direct result of the poor economy. It goes on to reveal the negative effects of sleeping aids and encourages people to fall asleep on their own and get better sleep naturally.

But, how can this be achieved? Sit ‘n Sleep, (www.sitnsleep.com), the largest mattress retailer in Southern California, understands the importance of getting enough rest, and the company’s top priority is to help people sleep better.

The SleepBook.com survey and book download process is helping users to understand the reasons for their sleeplessness and begin to resolve these problems using expert sleep tips and advice.