You are here: Home › The Balancing Act on Lifetime Television Launches Dynamic Fall Season with New Hosts and Set
By Florida Newswire on August 19, 2009 in Mass Media News

POMPANO BEACH, Fla. /Florida Newswire/ — This fall American coffee cup tippers will be breaking new “grounds” by changing their normal morning show routine – and tuning into the newly revamped “The Balancing Act” – from Brandstar Entertainment. Women who want a fast-paced half-hour of news you can use, and endless entertainment will be looking to the Balancing Act for their daily dose of trends and tips – featuring advice from the country’s leading experts. Due to the overwhelming response to the program’s first season, the producers are taking the popular morning show to a dynamic new level of style and substance. 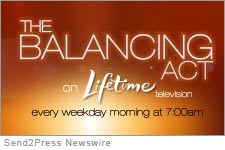 The new season, which kicks off August 24th, will reveal two engaging new hosts, Beth Troutman and Kristy Villa. Not only a new set of hosts-but also a new sophisticated set and look!

“Women are craving a morning show that really speaks to their issues,” say Michael Moss, Executive VP of Production for The Balancing Act. “They want a show that’s fun, without a lot of fluff; they need real advice that will help them and their families every day.”

A nationwide search went out to find the perfect-or should we say well balanced duo. Moss says, “You can imagine the competition. But we chose Beth and Kristy because of the way viewers will relate to them. They are bright, funny, energetic, and they get it!! They know the struggle it is to keep the balance between all of a woman’s multiple roles.”

Beth and Kristy have it down to a science with their chemistry! They are exciting to watch as they banter, and play off of each other’s words. They’re informative, their dynamic-what can we say? They’re women! Beth and Kristy both say, “We’re already hearing the buzz about the show – and are excited to be a part of it!”

Beth Troutman, a North Carolina native, has had a diverse and groundbreaking career. At 19, while still in college, she founded a not-for-profit organization focusing on self-esteem issues for young girls. She later spent four years working for the television series The West Wing, and became so inspired that she became the first woman to run for the U.S. House of Representatives in North Carolina’s District 8. After losing in a very tight race, she was then tapped to host the morning show Fox News Rising. She is married and lives in South Florida.

Kristy Villa, a Miami native, has been a highly respected anchor and reporter in some of the country’s largest television markets including Miami, Houston and Phoenix. She’s covered an array of national stories including the Papal visit to Cuba and Hurricane Wilma. As a former medical representative, Kristy brings a wealth of knowledge about the health issues that concern women. She is married with two children.

About The Balancing Act

The Balancing Act TV show on Lifetime Television is America’s only morning show about women, for women, trusted by women. The show airs weekdays at 7 a.m. ET/PT. Please check your local listings. For more information go to www.thebalancingact.com.