BEVERLY HILLS, Calif. /California Newswire/ — The Internet is a place where young freedom lovers post videos. One working with Ron Paul appeared on Judge Napolitano’s show talking about how he was stopped and threatened with being turned over to the DEA for carrying cash. Pastor Craig Rubin of the Beverly Hills Green Cross is not afraid. Steve Bierfeldt and Craig Rubin had secretly taped the government violating their rights and put these videos on the web. With Bierfeldt government officials begin using foul language while the 25 year-old gentleman being harassed by the government agents keeps his cool acting respectfully. 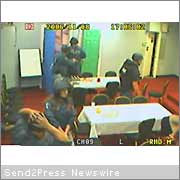 Ben Franklin once said that if you ever want to take away a people’s freedom, the first steps would be to get rid of free speech and a free press. In the United States we have plenty of outlets for the press, but they are mostly owned by only a few corporations. It is the contention of many who believe that a Global Union or New World Order is coming that to bring about this global governance the U.S. Constitution must be destroyed because it protects, when applied with force, an individual’s right to life, liberty and the pursuit of happiness.

The California State Supreme Court has done their best to outlaw free speech and freedom of religion by denying a hearing of the case of ‘Rubin v. People of the State of California’ where a pastor, Pastor Craig Rubin of Showtime’s Weeds and movies, selling medical marijuana was denied the right to mention the U.S. Constitution, the California State Constitution, medical marijuana (in a CA State Court), the Bible and the First Amendment of the Bill of Rights that protects free speech. However, the Internet has become a bastion of freedom in the face of increasing social control.

Rubin claims the only thing that protected the pastor was the fact that the raid was secretly video taped and showed DEA agents stealing from the church as well as smashing open the churches donation box with a hammer. Rubin was sentenced to five years in jail, but only given probation. However his assets were seized and he has yet to be given a hearing to see if that was done lawfully even though the judge in the case gave him written permission to reopen his church that provides medical marijuana this time called the “Beverly Hills Green Cross” at 2370 Robertson Blvd. 90034.

Christians are turning to the Internet to explain what is happening to them. Citizens of the United States are having the rights taken from them at an unprecedented rate since 911. What began with the Drug War in 1972 has turned into an out right battle for human rights and civil liberties within the borders of the Land of Liberty. Each year thousands of children are taken from their parents by the state, but people who put their faith in Christ are fighting back.

The latest YouTube star is Pastor Steven Anderson who not only posts videos of his sermons — www.youtube.com/user/sanderson1611 — but also of his run-ins with the Border Patrol being a pastor in Southern Arizona. Anderson fearlessly stands up for his freedoms knowing the Bill of Rights and often quoting it. This Christian pastor is following in the foot steps of Christ, willingly putting his body in the way of government officials who are systematically taking away the rights of citizens of this country. Many Christians feel as if they are being labeled terrorists since Department of Homeland Security’s top official warned of domestic terrorists being veterans and right-wing extremists. The fact is Christians pray for the destruction of America with the Lord’s Prayer when they pray, “Thy Kingdom come,” they are praying for the return of their Lord to earth to rule in an earthly Kingdom.

For his tireless efforts in defending the U.S. Constitution Pastor Anderson was recently given a severe beat down and now wears a scar similar to Jesus’ crown where Arizona law enforcement shoved his forehead into broken glass. The glass came from when his windows were broken; he was then electrically tased and this all for demanding his rights as a free American protected by the Constitution.