You are here: Home › This Holiday Season, Church of Scientology Reaches Out to Help End the Drug Overdose Crisis
By California Newswire on November 23, 2021 in California News

LOS ANGELES, Calif. /California Newswire/ — Just last week, the U.S. Centers for Disease Control and Prevention announced more than 100,000 people died of drug overdoses in the United States during the 12-month period ending April 2021. The Church of Scientology International urges concerned parents, educators and community leaders to take action against the “other pandemic” with drug education and prevention.

The Church is making fact-based drug education materials and courses available free of charge to anyone wishing to help turn around what the U.S. Drug Enforcement Administration is calling “a national crisis” that “knows no geographical boundaries.” 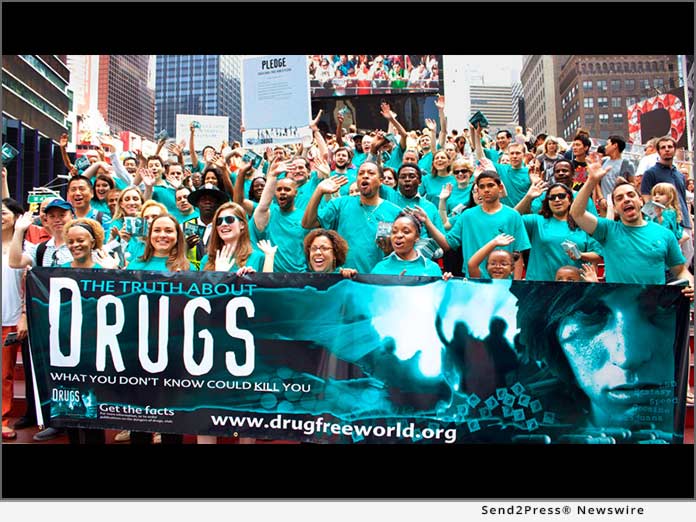 Drawing on five decades in the field of drug education and prevention, the Church of Scientology developed the Truth About Drugs, now one of the world’s largest nongovernmental drug information and prevention initiatives. In 2006, Foundation for a Drug-Free World, a secular nonprofit corporation, was formed to serve as the primary distributor of the educational materials and to develop new materials to meet the challenge of continually changing drug trends.

The Foundation today oversees the Truth About Drugs campaign and coordinates an international network of volunteers brought together by their common purpose to create a drug-free world.

The Foundation has grown to a network of thousands of volunteers in more than 200 chapters around the world and partnerships with some 1,800 groups and organizations.

The Scientology Network original series Voices for Humanity documents the kind of change this initiative is accomplishing:

* In San Diego, California, Dr. Beatriz Villarreal uses the initiative to combat drug abuse by educating families on the dangers of drugs.

* In his native Massachusetts and throughout the U.S. Darren Tessitore works with driver’s education programs to take action against drug-related accidents, vital with traffic deaths clocking in at 20,160 in the first six months of 2021-18.4 percent higher than last year.

* In New York City, the father and daughter team Dr. Bernard and Meghan Fialkoff have reached thousands of inner city schoolchildren with the Truth About Drugs.

* And from Colombia to Malaysia, South Africa to the Philippines and Kenya to India, drug prevention activists are empowering generations of youth with an initiative that continues to grow exponentially at the grassroots level.

All this to say there is effective action parents, educators and community leaders can take to protect their children, communities and the next generation from drug abuse and addiction. According to the United Nations Office on Drugs and Crime, “Prevention strategies based on scientific evidence working with families, schools, and communities can ensure that children and youth, especially the most marginalized and poor, grow and stay healthy and safe into adulthood and old age. For every dollar spent on prevention, at least ten can be saved in future health, social and crime costs.”

Learn more about the Truth About Drugs initiative and Foundation for a Drug-Free World on the Scientology Network.

Originally published on CaliforniaNewswire.com -- This Holiday Season, Church of Scientology Reaches Out to Help End the Drug Overdose Crisis