BONITA, Calif. /California Newswire/ — Over the last five years or so, new Web 2.0 tools have hit society like one wave after another: MySpace, Skype, Facebook, YouTube, all the various iPhone and Blackberry applications, and now Twitter. The effect, according to social scientists, is to vastly increase both the complexity and content of communication, such that the planet appears more and more like a vast integrated Mind, akin to James Lovelock’s “Gaia” or Pierre Teilhard de Chardin’s “Noosphere.” This is the rationale for the World Mind Network. 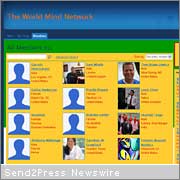 To a large degree, Web 2.0 tools have been used historically for rather trivial purposes: games, gossip, silly videos, and inconsequential chatter. Recent events in Iran may indicate a turning point.

The WMN wants to help people use these tools for grander purposes. They use these vastly expanded powers of networking to improve education, do research, build community across political divides, and utilize collaborative online mind-mapping to address common problems. The Board of Trustees includes five Nobel Laureates.

Their first project was helping a multimedia ICT Education center in Kenya receive funding through donation of unused cellphone minutes.

Joining the World Mind Network (www.theworldmindnetwork.net) is like having a Facebook or Twitter account, but it assumes that one is interested in improving the world somehow. Participants can join a forum devoted to improving science education co-moderated by a Nobel Laureate (Peter Doherty), start a psychological research project, or contribute to an interactive blog on the world economic crisis co-hosted by another Nobelist (Edmund Phelps). Members are setting up live webcam links between secondary classrooms in South Africa, Macedonia, and Japan.

The fact that an average person can have an enormous effect on the world through free tools that are used every day for business and pleasure is becoming more and more evident.

According to the World Mind Network, in the last 15 years or so Humanity has traversed the anthropological scale from Homo Sapiens (Thinking Man) to Homo Connnectivus (Connected Man) to the current Homo Endunamonus (Empowered Man).

The possibilities are endless. See theworldmindnetwork.net .