You are here: Home › Power of the Ballot Debate Watch Party and Comedy Show Set Off GOTV Mobilization Efforts with Celebrity Talents BPhlat, Erin Jackson and MESHELLE
By Send2Press Newswire on October 17, 2022 in Mass Media News 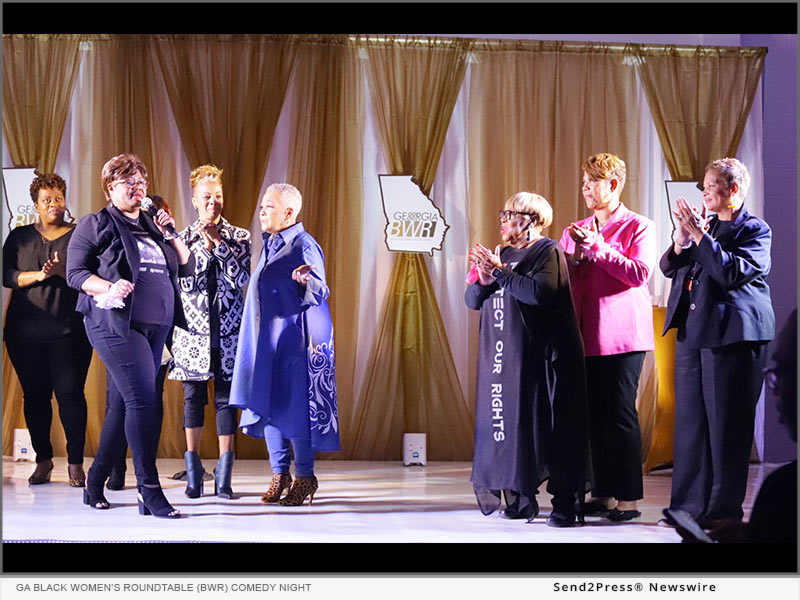 ATLANTA, Ga., Oct 17, 2022 (SEND2PRESS NEWSWIRE) -- Call it the calm before the midterm election storm. Georgia Black Women's Roundtable (GA BWR) treated staff, volunteers, local and national leaders, and members of the community to a night filled with tasty food, great company, and a lot of laughter when they hosted a Power of the Ballot Debate Watch Party and Comedy Show this past Friday, October 14 at IBEW Local 613. The event kicked off a weekend of organizing as election activists hit the streets to educate and motivate citizens to be among the first to cast a ballot for early voting which begins on Monday, October 17.

"We are beginning this very serious mobilization phase with a fun event because our workers and volunteers have been pounding the pavement for months and we know how hard it will get over the next few weeks to motivate and mobilize frustrated voters," expressed Helen Butler, executive director of Georgia Coalition for the People's Agenda (People's Agenda) and convener of GA BWR.

Butler continues, "We are also fighting voter suppression tactics so we are training more poll workers than usual and, if it's anything like 2021, we may have to deal with angry voters retaliating because they believed there was voter fraud. Black voters understand the power of the ballot and will turn out like they did in 2020 so we want to make sure they can vote. We have a lot of work to do so it was great to relax and enjoy the comediennes."

As part of the organizing weekend the nonpartisan groups traveled through the Atlanta area on a bus wrapped with get-out-the-vote messages about the power of the ballot and urging people to vote. The bus will continue to visit cities in Georgia to mobilize Black voters and let residents know they can get a free ride to the polls by calling the GA Coalition for the People's Agenda hotline at 877-524-8683.

Additional events over the weekend included a tailgating event on Saturday at the NCBCP Thomas W. Dortch, Jr. Institute during Clark Atlanta University's Homecoming, and on Sunday Georgia STAND-UP hosted a brunch and gospel concert at their headquarters in East Point, GA. The organizing weekend was part of NCBCP's seven-state Unity '22 Black Women's Roundtable Power of the Ballot GOTV Comedy Tour and Organizing Weekend.

Comediennes Meshelle "The Indie Mom" of Comedy, Erin Jackson and BPhlat were just a sampling of the special guests who lined up to get out the vote. The comedy show followed the debate between former football player and businessman, Herschel Walker, and Georgia Senator and Pastor of Ebenezer Baptist Church, Senator Raphael Warnock.

For more information about the Georgia Black Women's Roundtable, or to volunteer, email coalition@bellsouth.net, call the People's Agenda at (404) 653-1199 or visit http://thepeoplesagenda.org.

ABOUT THE PEOPLE'S AGENDA/GA BWR

Georgia Black Women's Roundtable is convened by the Georgia Coalition for the People's Agenda (http://thepeoplesagenda.org). The People's Agenda is a nonprofit, nonpartisan organization performing year-round voter registration, education, and mobilization in Black communities throughout Georgia. Led by board chair, Rev. J. A. Milner, and Helen Butler, the organization has headquarters in Atlanta and offices in Athens, Albany, Macon, Augusta, LaGrange, and Savannah.

The Georgia Strategic Alliance for New Directions and Unified Policies (Georgia STAND-UP) (https://www.georgiastandup.org) provides research, strategy, technical support, and resource development for grassroots community organizing and non-partisan voter education. STAND-UP and Vote! is their year-round voter education and registration campaign. STAND-UP is one of the most visible and successful voting advocates in the Southeast emphasizing "boots on the ground," door knocking, and grassroots mobilization.

The Atlanta North Georgia Labor Council (https://unionhall.aflcio.org/atlclc) is one of nearly 500 state and local labor councils of the AFL-CIO and are the heart of the labor movement. We are democratically elected bodies dedicated to representing the interests of working people at the state and local level. We mobilize our members and community partners to advocate for social and economic justice and we strive daily to vanquish oppression and make our communities better for all people.

This press release was issued on behalf of the news source, who is solely responsible for its accuracy, by Send2Press Newswire. To view the original story, visit: https://www.send2press.com/wire/power-of-the-ballot-debate-watch-party-and-comedy-show-set-off-gotv-mobilization-efforts-with-celebrity-talents-bphlat-erin-jackson-and-meshelle/